No we're not planning on dying here in Danga Bay but I have thought of establishing a retirement village for senile sailors.

We're still busy with the work that has been deferred for quite some time but we are moving along. We even 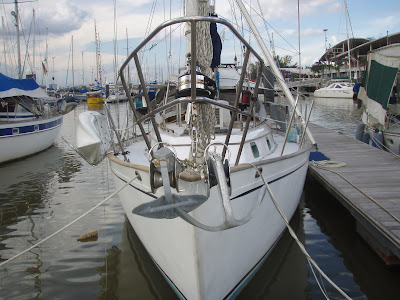 now once again like a boat. The anchor rollers and other hardware back in place. Those anchor's look to have never been used since they have been re-galvinized. The other projects are coming together too. 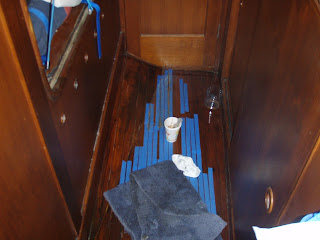 Kathy is trying to finish her varnish project but first more repair work to the cabin sole. Through the years the underlying plywood has become a bit rotten. Once again it's the epoxy injection trick. Thinned epoxy is smeared along the cracks, allowed to penetrate through and after drying the floor is solid again. Next sanding and varnish. 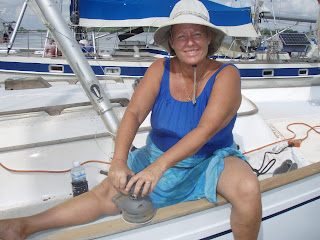 Kathy has also been busy with some exterior work. No we do not plan on bringing the outside trim back to varnish. Gray teak is just fine but after several years of scrubbing it's time to do a bit of sanding to even out the grain and test out the new sander. 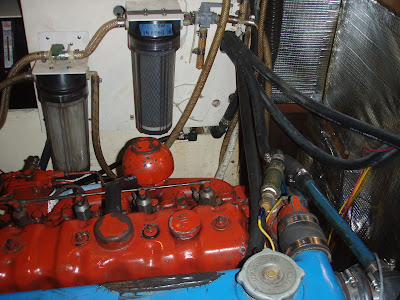 Previous blogs have lately dealt with our outside deck and cabintop painting, along with a leaking portlight. Water leaks have not been the only leak lately. Our auxillary engine, "Miss Perky" has also had some issues too. Shortly after changing out the oil and transmission fluid lines I began to notice more then normal oil in the bilge. Now "Miss Perky" is a tractor engine made by Perkins and they have always been known to leak a bit of oil but not as much as what was showing up in the bilge. Since this began after the installation of the new oil lines that was my first clue. I kept looking but was unable to discover the cause. 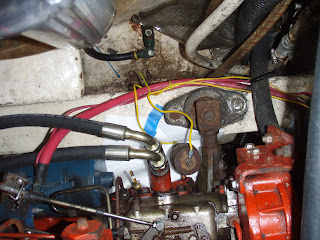 After a through bilge cleaning and then placing oil absorbant pads in a number of locations "Miss Perky" was started and let to idle. Lying atop the engine I finally managed to see a slight drip of oil coming from the base of one of the oil lines. It was not a loose connection but rather a buggered fitting 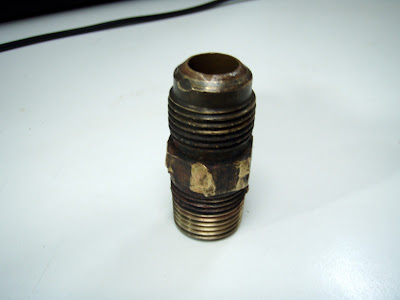 The dimple in the top of the cone caused a bad seal. The next step was trying to remove the fitting. It would not budge. So the entire assembly had to be taken off before I managed to get the fitting out and a new one installed. 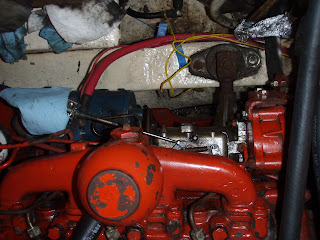 This was my work area. Hey compared to lots of other boats this is very roomey. It took a bit of time but no more oil leakage.

Remember that I said we had fixed one of the leaking portlights, well with the dogs and cats once again falling from the sky another has begun leaking. I guess I'll always have something to keep busy.


As I normally start my day at 6 am with coffee and a check of the internet for news and sports then begin on the boat projects about 8, after lunch it's siesta time. The floor always makes my back feel better, the BEER helps too..

Today was the first coat of finish paint in the cockpit, it's white but somewhat resembles having been applied by a wisk broom. No worries tomorrow it will be sanded and with luck the next coat will be better. Soon we hope to be on the move again and out enjoying this crazy cruising lifestyle.
Posted by S/V Po'oino Roa at 3:52 AM

S/V Po'oino Roa
Jerry and Kathy are full time cruisers originaly from Newport Beach California and live aboard the S/V Po'oino Roa, a Peterson 44. Bought in North Carolina in Decembeber of 2000 their travels have taken them from the eastern seaboard of the US through the Caribbean, westward through the Panama Canal. Then the west coasts of Central America, Mexico and back to southern Calif for refit work. In 2004 it was back to Mexico then west across the Pacific in 2006 with stops in French Polynesia, the Cook Islands, Samoa, north to Tuvalu the Kiribati's and the Marshall Is. Then back south for a year in Fiji, next to Vanuatu and then Darwin, Australia. We then continued on to Southeast Asia visiting Indonesia, Malayaisa and Thailaind over two cruising seasons. Now it is heading back east. We currently in the Philippines have lots of projects done. The future holds a trip eastwartd across the Pacific and back to the cruising grounds of the west coast of Mexico and the Sea of Cortez.